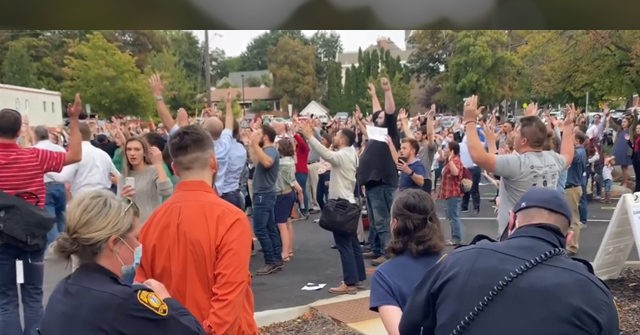 Officers arrested Gabriel Rench, Rachel Bohnet, and Sean Bohnet, according to Moscow Report, a local independent news outlet. A video uploaded to social media shows Bohnet, a local music teacher, and his wife telling officers they refused to comply with an inaudible order. Moscow Report says the apparent infraction is that they refused to show identification.

Footage of the couple’s arrest shows the church body singing the hymn “Praise God from Whom All Blessings Flow” as officers place them in handcuffs.

Rench is a co-host of CrossPolitic, a Christian political talk show, and a candidate for county commissioner. “You guys should not be doing this,” he told officers as they walked him to a squad car. “And doing this kind of crap for the mayor, this is embarrassing. You guys are stronger than this.”

Released that same day, Rench appeared on his talk show to discuss the arrest, playing extended footage of his conversation with officers. One of his companions is heard telling the officers “We backed you guys” at recent Black Lives Matter protests advocating to defund the police. “They didn’t send you [to enforce social distancing] with BLM to go do that when they said defund you guys. We backed you guys.”

“I got booked in jail; I was in jail for about two hours,” he said. “And as they were de-booking me, or whatever they call it, I’m walking out and I go by their office, which is right next to where I’m getting booked out. And there’s three deputies in the officer, and two of them aren’t wearing masks and sitting right next to each other. And I said, ‘hey, should they get arrested?’”

The Lewiston Tribune reports that about 150 people attended the event, organized by Christ Church — a Reformed evangelical church famous for its outspoken pastor Doug Wilson, an author who debated atheist Christopher Hitchens in the 2000s.

The paper quotes a Christ Church pastor as saying the event was a “statement” against the city’s “largely groundless” laws:

The Rev. Ben Zornes, a Christ Church pastor and organizer of the event, said the church hosts psalm, or hymn, events about once a month at places like Friendship Square, East City Park or a house. Zornes said Wednesday’s psalm sing was also a fitting way to show that residents want a return to normalcy in the face of COVID-19.

“We wanted to make a statement we’re ready to head back to normal,” he said, claiming it is time to start pushing back against “largely groundless” laws — referencing the mask order — that are being passed and enforced without giving heed to what residents want.

[L]ast Monday night, our city council extended their masking mandate into January. This, despite the fact that our county, Latah County, has had zero hospitalizations, and there have been zero deaths. We are not facing a medical emergency here. This has become increasingly obvious to every unbiased observer as time has gone by.

The second factor is that just a few weeks ago, there was an outdoor wedding here, presided over by our mayor. At least one of our council members was in attendance, as was law enforcement. Masks, however, were not in attendance. If there was no virus hazard at that wedding (and there was not), then there was no virus hazard at our psalm sing yesterday (as there was not). If anyone is interested in pursuing that issue, I understand that weddings frequently have photographers at them. I have seen evidence of just such a photographer. By having his police department enforce his order, our mayor is not enforcing an order that we don’t believe has merit, but which he does. No, not even close. He is enforcing an order that he does not believe in either.

So we have every right to protest the high hypocrisy involved in all of this. Not only so, but I believe we have a responsibility to do so.

On the CrossPolitic broadcast, Rench said the psalm sing event was about asserting individual liberty. “Is it about the masks? Kind of,” he said. “But it’s not. It’s way bigger than that.”

“It’s about the direction our country is going,” co-host Toby Sumpter chimed in. “About us rejecting Christ, rebelling against Christ… if you can riot in Portland, for how many days? A hundred days? If you can have CHOP or CHAZ or whatever it was in Seattle, and all of that going on — and the police are hands off, getting defunded. And if you can have a Black Lives Matter rally in Moscow, Idaho, in the middle of July — completely unharassed — and then you have a few hundred Christians singing praises to Jesus and they’re getting arrested, what has happened to your country?”