There Are Liars, Damn Liars And The United Nations

There Are Liars, Damn Liars And The United Nations

When it comes to telling whoppers about climate change, weather extremes and any number of climate-related catastrophes, the United Nations has no equal. Their latest (2020) report proves this beyond any doubt.

Recently released is the UN’s report, dramatically titled: Human Cost of Disasters: An Overview of the Last 20 Years (2000-2019). This report stems from the United Nations Office for Disaster Risk Reduction (UNDRR) and its Centre for Research on the Epidemiology of Disasters (CRED).

The report Foreword tells us that:

“This report focuses primarily on the staggering rise in climate-related disasters over the last twenty years.”

This is followed by the not unexpected attack on developed nations:

“But the odds continue to be stacked against them in particular by industrial nations that are failing miserably on reducing greenhouse gas emissions to levels commensurate with the desired goal of keeping global warming at 1.5 ̊C as set out in the Paris Agreement.”

“It is baffling that we willingly and knowingly continue to sow the seeds of our own destruction, despite the science and evidence that we are turning our only home into an uninhabitable hell for millions of people.”

Any reader of this report will immediately see this is not a dispassionate, empirically-based document prepared by scientists who have carefully scrutinized the available literature on natural disasters. Rather it is the product of activists and alarmists, using hyperbole and silly phrases such as: “staggering rise in climate-related disasters”; “failing miserably on reducing greenhouse gas emissions” and “turning our only home into an uninhabitable hell.”

Apparently, the UN’s version of “the science and evidence” is not the same as the version embraced by the wider and more credible scientific community.

As always, the UN’s extreme alarmism is accompanied by the anticipated “tipping point” and “Last Chance” to avoid those “disastrous consequences” that simply never happen.

Here is a typical example:

“If we do not change course by 2020, we risk missing the point where we can avoid runaway climate change, with disastrous consequences for people and all the natural systems that sustain us.”

Anyone reading this UN report would do well to compare it with NOAA’s Dr. David Legates’s summary of the many failed predictions from climate alarmists.

In yet another tedious attempt to link carbon dioxide emissions with imaginary global warming and any natural disaster, we are told:

“This is clear evidence that in a world where the global average temperature in 2019 was 1.1oC above the pre-industrial period, the impacts are being felt in the increased frequency of extreme weather events including heatwaves, droughts, flooding, winter storms, hurricanes and wildfires.”

This should be enough for any sensible person to dismiss the report as more UN propaganda from officials who rely on the likelihood that few politicians will check their claims against actual data. The same UN officials know that the media, many politicians and Green NGO’s will continue to promote this alarmist nonsense.

The UN seriously expects everyone to believe that:

Incredibly, the UN produced a graph in 2020 that showed how climate-related disasters have actually declined:

Yet the UN’s latest report tells us there has been a “staggering rise in climate-related disasters.”

“The UNDRR’s own data shows that climate-related disasters have actually been declining for 20 years.”

“The United Nations must immediately withdraw this report and apologize for misleading the public.”

I doubt there is much chance of that happening.

Dr. Roger Pielke Jr. is a well-respected scientist and recognised expert on natural disasters. He has criticised the UN report, saying that its data on disasters from the last century are flawed and therefore unreliable.

Pielke, along with other reputable scientists, has acknowledged that there has been an increase in financial loss due to natural disasters but this is not attributable to any increase in extreme weather events. Common sense (and insurance companies) should tell us we are seeing an increase in population with more people having more wealth and more assets to lose.

Additionally, financial losses due to natural disasters will inevitably increase as more people with more wealth and assets choose to live in accident-prone areas such as bushland, floodplains, earthquake-prone areas, eroding and subsiding coastlines.

Despite this increase in financial loss, Dr. Bjorn Lomborg points out:

“When you adjust damage costs for size of economy, which even the UN Sustainable Development Goals insists you should, the relative cost of disasters is declining, not increasing.”

We have reliable data from the last 30 years showing how the relative cost of disasters has declined:

In fact the global population has increased by more than 70% since 1980 whilst the death risk has fallen by around 60%.

Returning to the UN report’s dramatic and factually incorrect statement:

“This is clear evidence that in a world where the global average temperature in 2019 was 1.1oC above the pre-industrial period, the impacts are being felt in the increased frequency of extreme weather events including heatwaves, droughts, flooding, winter storms, hurricanes and wildfires.”

This is sheer nonsense. So what do the real data show?

During recent decades, heatwaves in the US remain far less frequent and severe than was the case during the 1930s. 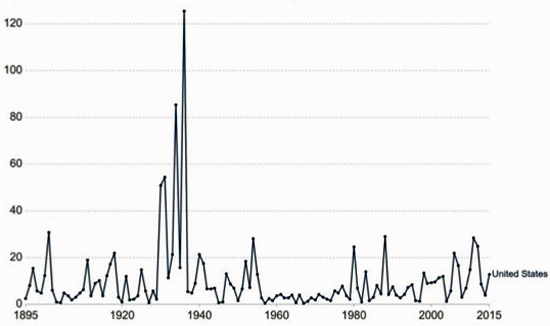 “Most of the temperature-related mortality burden was attributable to the contribution of cold.”

Many of those deaths are attributable to people who have not been able to afford the rising costs of electricity or have no access to inexpensive, reliable electricity in their countries.

The UN report, with its obsession over imaginary dramatic global warming, ignores temperature data from satellites and radio-sondes. The UN also ignores reliable surface temperature data and paleo-data that contradict the report’s alarmism.

Studies of past global temperature estimates show there is no evidence for any change in the globally-averaged near-surface temperature over the last 100 years.

There are over 90 peer-reviewed, published papers that dispute any claims of unprecedented global-scale modern warming.

In summary, there has been no detectable long-term increase in heat waves in the US or anywhere else in the world. Record high temperatures were recorded long before the widespread use of hydrocarbon fuels.

The UN report claims that we are seeing an increased frequency of droughts. This claim is also without any empirical foundation.

The Palmer Drought Index for the US has data going back over 100 years:

Apart from the 1930’s “Dust Bowl” years, there is no long-term trend in either dryness or wetness in the US and this remains true globally.

Cook et al. (2015) found that Mega-droughts during the past 2,000 years were worse and lasted longer than current droughts and data from the National Oceanic and Atmospheric Administration (NOAA) show no trend in the proportion of the globe in drought since 1950:

The UN report claims that we are seeing an increased frequency of flooding. This claim is also without foundation.

“The good news is U.S. flood damage is sharply down over 70 years. Remember, disasters can happen any time…. But it is also good to understand long-term trends based on data, not hype.”

“The Intergovernmental Panel on Climate Change (IPCC) concluded that globally there is no clear and widespread evidence of changes in flood magnitude or frequency in observed flood records.”

“The results of this study, for North America and Europe, provide a firmer foundation and support the conclusion of the IPCC that compelling evidence for increased flooding at a global scale is lacking.”

Hirsch and Ryberg (2012) noted that, in none of the four regions defined in their study, was there strong statistical evidence for flood magnitudes increasing with increasing carbon dioxide levels.

“We analysed the historical record of Atlantic basin and US landfalling hurricanes, as well as US continental accumulated cyclone energy to evaluate issues related to trend detection.”

This is in agreement with findings from Drs. Pielke, Maue and Weinkle who reported:

“The analysis does not indicate significant long-period global or individual basin trends in the frequency or intensity of landfalling TC’s of minor or major hurricane strength. The evidence in this study provides strong support for the conclusion that increasing damage around the world during the past several decades can be explained entirely by increasing wealth in locations prone to TC landfalls, which adds confidence to the fidelity of economic normalization analyses.”

Dr. Judith Curry points out that:

“Ever since Hurricane Katrina in 2005, any hurricane causing catastrophic damage has been seized upon by climate alarmists as evidence of the horrors of global warming.

As if the record-holding hurricanes from the 1920’s through the 1950’s never happened.”

The UN report says we are seeing an increased frequency of wildfires. This is also without foundation.

Long-term satellite monitoring provides reliable data on global wildfires and, in contrast to UN alarmism, NASA has shown that between 2003 and 2019 global wildfires have declined by around 25%.

NASA has produced maps with fire locations and extent. These are based on observations from NASA’s Moderate Resolution Imaging Spectroradiometer (MODIS) carried on the Terra satellite. 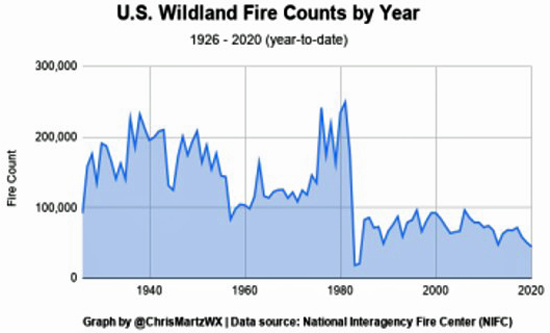 Why do we need to reduce emissions when current levels are amongst the lowest in 500 million years and all life on the planet would benefit from more atmospheric carbon dioxide?

How do we know when the UN is telling lies?

Answer: Usually when they release a report about climate change.

Dr. John Happs M.Sc.1st Class; D.Phil. John has an academic background in the geosciences with special interests in climate, and paleoclimate. He has been a science educator at several universities in Australia and overseas and was President of the Western Australian Skeptics for 25 years.

December 23, 2020 – Posted by aletho | Science and Pseudo-Science, Timeless or most popular | United Nations